The Islamic Cultural Center of Greater Chicago is located in one of the most vibrant communities on Chicago’s north shore, namely the village of Northbrook which is located approximately 25 miles north of downtown Chicago.

On Saturday, September 8, 1974, a ground-breaking ceremony took place in a lot of little over 2 acres Representatives from both the Muslim and the Non-Muslim communities were invited in order to reflect the Center’s Islamic as well as American identity.

Ceremony of the Center’s second phase (the mosque and the minaret) Ground Breaking was held on June 29, 1984. The second phase was completed in 1988. This added the prayer hall which accommodates 500 worshipers, a lecture hall that seats 200 people and a minaret which was the first and only erected minaret in the State of Illinois at the time.

Imam Kamil Avdich, a Bosnian native, was the first Imam of the center. He stayed as Imam until his death in December 1979. Imam Avdich strived to maintain harmony and unity among all Muslims regardless of their original ethnic backgrounds. Among the Center’s Imams was Imam Dr. Mustafa Cerić, who later became Rais (Ra’ees) Al-Ulama and the Grand Mufti of Bosnia Herzegovina. Imam Cerić emphasized the teaching of the Arabic language at the center.

The Center serves Muslims of many different ethnic backgrounds, who reside all over the Chicago land area. The Center has a multi-ethnic membership. The majority of the members are of Bosnian, Montenegrin and other Balkan origins. However, members of Arab origin constitute an important part of the membership. The membership also includes members of Pakistani, Indian, Turkish, African, and other ethnic origins. The Center has a Board which consists of members of Bosnian and Arab origins.

For Muslims, the Mosque has a distinctive spiritual function. It is the place which rekindles the Muslim’s spirituality, and which provides a sense of sanctity, calmness, and inner peace. 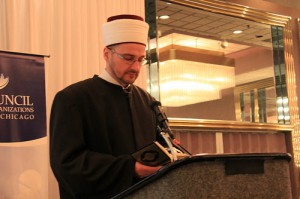 Imam Hazim Fazlic is dedicated teacher, renowned speaker and interfaith activist. Prior to being appointed the Imam of Islamic Cultural Center of Greater Chicago, Imam Fazlic worked as religious and community leader for the Bosnian-Muslim community in London and Birmingham (UK) for 11 years. He is active in interfaith work, and worked with representatives of Christian, Jewish, Sikh, Hindu and Buddhist communities. In 2009 he co-founded Faiths Connected Foundation, a charitable organization dedicated to the promotion of religious harmony and understanding among young people in the wider area of Birmingham, UK.

Imam Hazim Fazlic was educated in Bosnia, where he obtained his education in classical Islamic disciplines at the oldest Muslim educational institution in South East Europe, Gazi Husrevbegova Medresa. He also obtained his BA in Islamic Studies from the University of Sarajevo. In 2002 he moved to England where obtained his MA in Islamic Studies at the Centre for Islam and Muslim –Christian Relations of the University of Birmingham. . At the same institution, he successfully defended his PhD thesis, ‘Religious Changes in Former Yugoslavia from 1989 to 2009’ in 2012. His current research interests revolve around the Muslim diaspora from South East Europe and the issues of integration and assimilation. Imam Fazlic has also published several papers and articles about the intellectual discourse of Balkan Muslims.